I’m in Love with the Woman in My GPS 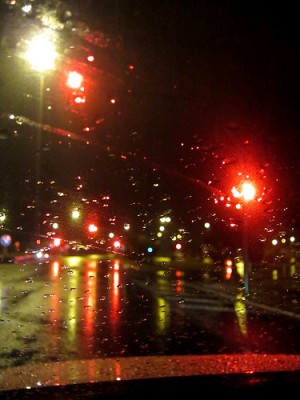 On Saturday night, I was driving home from visiting my daughter at college. The freak snowstorm of October, 2011 was just getting underway, with rain turning to snow. Traffic was slow, visibility poor. I was starting to get irritated at the reflections of people’s headlights and taillights on the wet road ahead of me. They made it even harder to see.

Suddenly it dawned on me: How amazing is it that we humans have figured out how to throw photons around so we can drive at night? We even know how to apply filters so we only get the photons we want: white in front, red in back. Those irritating reflections became a source of wonder.

Once my mood shifted, I considered another marvel.

Only a few hundred years ago, one of mankind’s big, unsolved problems was how to get a ship across an ocean without getting lost. Knowing one’s latitude was easy, but knowing longitude was such a problem that in 1714 the British parliament established a prize worth a small fortune, to be awarded to anyone who could invent a system for determining longitude within 30 to 60 nautical miles.

Today, any middle-class resident of Britain’s former colonial outpost can afford a device to stick on the windshield of his automobile (his automobile!) that will display his position accurate to within a few feet. I was using such a device at that very moment.

It is truly astonishing, what we have accomplished in only 300 years.

Those were the musings in my head when an even more fantastic thing happened. In the midst of my traffic jam, the woman in my GPS spoke to me.

I had earlier selected her as the most pleasing speaker of French, Spanish or English among the dozens available. She was my ideal. (OK, from time to time I have an interlude with one of the French speakers, but those are just meaningless flings.) Usually, her role is to gently remind me of an upcoming turn or to tell me that I have reached my destination. This time was different.

She spoke to reassure me:

“You are still on the fastest route.”

What man could ask for anything more? Here’s a beautiful woman (I can tell by her voice that she’s beautiful) whose only desire is to tell me that I’m doing everything right.

She anticipates that I might be getting irritated at the traffic delays, but does not ask me to get into girly talk about my feelings. Like a female Jeeves, she considerately attends to my needs and then lets me return to my thoughts.

Here’s another thing I love about her. If I make a mistake and miss a turn, there are no recriminations. She is not startled. She does not change her tone of voice. She just continues to be my help-meet as if nothing had happened.

True, her capabilities and her perceptions of my emotions are very limited. I can’t tell her about my day, for example. On the other hand, usually there’s not much to tell, so a woman with a soothing voice who thinks I’m still doing the right thing is just perfect.

My dashboard girlfriend and I have a very limited relationship, but within its parameters I am very happy.

As I drive, I wonder: What is really the difference between an electronic circuit meeting one need so well and neural circuitry doing the same thing — sometimes not as well? Once electronic circuits can meet vastly more needs, and receive vastly more care, how will we feel about them? Will we develop compassion for them, and they for us, as in the movie, I, Robot? Is Apple’s Siri the next step in this direction?

Neural chemistry itself is driven by electronics, namely the positive and negative charges on molecules. What is the difference between that and a digital computer? Many scientists believe that mind is an emergent property of matter being organized into a human brain. If other material were organized much like a brain, would something we’d recognize as mind emerge from that, too? I tend to think it would.

In the meantime, it’s good to have a beautiful woman assure me that I’m still on the fastest route.