About a week ago, I had a dream that was unusual because it centered around a philosophical thought: complicated things often have simple explanations.

The dream was doubtless brought on by a conversation I had had concerning the Myers-Briggs personality types. In my own experience and in the experience of several people I know well who have taken the Myers-Briggs test, it yields an uncanny description of one’s personality. Yet, it does so by asking just a few dozen yes/no questions by which it measures where you fall on just four scales: extroversion/introversion, sensing/intuition, thinking/feeling, and judging/perception. (You can take the test for free in about 3 minutes here. Once you do, click on the Self-Awareness and Personal Growth link to see your personality profile. See if you don’t agree it’s amazingly accurate.)

The day after my dream, I thought about the spiral of the chambered nautilus. You may have heard that it follows the pattern of a golden rectangle — said to be the most pleasing rectangle to the human eye. What makes it “golden” is that the sides are in a special proportion: if you remove a square whose side is the short side of the rectangle, then the rectangle that remains will have the same proportions as the original. In this figure, the outer rectangle’s proportions appear again in the pink rectangle, once the blue square is removed.

Keep doing that, and connect the corners of the squares with a spiral, and you get the so-called golden spiral. 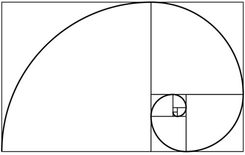 Enter the chambered nautilus. Here’s an actual specimen, showing how well its shell really does fit a golden spiral.

Now for the point.We see this and it seems miraculous. We jump to a million-horsepower explanation like “There must be an omniscient God who designed it!” However, a much simpler explanation does just as well.

To see it, reverse the process by which we pared the golden rectangle down into smaller and smaller golden rectangles. Instead of paring down, build it up by adding successive squares. At each stage, we have the same overall shape as we did in the previous stage. Likewise for the proportional layout of the inner “chambers” (except now we have one more of them). You can now imagine that if there were a creature who made himself a spiral shell, and whose body maintained the same proportions as it grew, then a golden spiral would be the inevitable result. It seems miraculous, but it’s really simple.

I have a feeling that there are simple explanations of many seemingly complex or surprising phenomena, if we’ll just tune ourselves to look for them.

This entry was posted in Beauty, Science and tagged Emergence, Science, Truth. Bookmark the permalink.

One response to “Simple Explanations”