The structure of the world is shot through with a sublimity so sublime that it simply had to exist. …

The sublimity that had to burst into existence is not one that particularly concerns itself with us. Such a human-centered goodness would not pack the ontological wallop required to bring forth existence. (Plato at the Googleplex, pages 385-389.)

I like that phrase “the ontological wallop required to bring forth existence.” I’ll return to it in a moment. First, let’s look at a pretty picture. 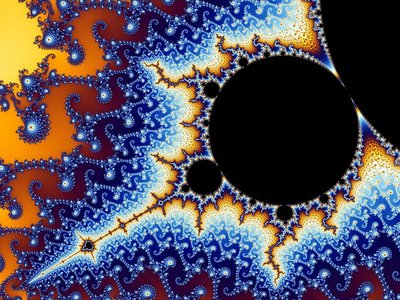 The area colored black is the Mandelbrot set, a set of numbers whose graph is infinitely intricate, meaning that you can zoom in to any depth and it never smooths out. (As a bonus, the “bug” shape keeps recurring, with variations, at every scale.)

Amazingly, the Mandelbrot set is generated by a very simple mathematical formula applied over and over. The details are here, but for this post the important points are these:

Nevertheless, the set and its formula have always existed. We have discovered them, but nobody created them. It’s like the number pi. Pi has always existed, as has the fact that pi can be generated by dividing a circle’s circumference by its diameter, or by this formula:

We have discovered that the universe is, as far as we know, completely describable in math. The laws of physics, therefore chemistry, therefore biology, could have been based on something else (justice?) but they are not. They are math.

In fact, the more we learn, the more we suspect that all laws of nature are just facets of a single law: a mathematical formula that is a Theory of Everything.

We said that the Mandelbrot formula and the Mandelbrot set were two ways of referring to the same thing. Would the formula for the Theory of Everything and the universe it “generates” be likewise identical?

In other words, would the formula be just as real as the results, and vice versa?

That is not as outlandish as it sounds. As reported in Science News, “Today some experts believe that the quantum formula describing atomic phenomena is not simply a mathematical tool, but is just as real as atoms are. That formula is known as … the wave function (*).” It describes in a very precise and mathematical way how each particle of the universe behaves over time.

The quantum wave function is so utterly complete that scientists are left asking, “What else is there?” Maybe this formula is all there is. Maybe what we call particles are just convenient ways of talking about the results of this formula.

And if the quantum wave function has always existed (which it has, just as much as the Mandelbrot or any other function), do we need any other explanation for the origin of the universe?

And if there are other functions with that much ontological wallop, would they generate very different universes of their own?

I don’t know, but it’s fun to think about.

(*) – The quantum wave function is probably not be the final answer, the Theory of Everything, but it is tantalizingly close.