We Can’t Go Back to Digging Up Roots 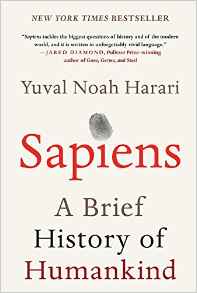 Do you ever feel like you’re working harder and harder just to afford all the stuff that you need because you’re working harder and harder? You work your butt off all week to achieve the American Dream of home ownership and now you must work your butt off on the weekends mowing the lawn in the summer, and wake up early to shovel snow off the driveway in the winter.
Apparently this is nothing new. According to Sapiens: A Brief History of Humankind, our transition from hunter-gatherers to farmers resulted in just that sort of unintended consequence.

With the move to permanent villages and the increase in food supply, the population began to grow. Giving up the nomadic lifestyle enabled women to have a child every year. Babies were weaned at an earlier age — they could be fed on porridge and gruel. … But extra mouths quickly wiped out the food surpluses, so even more fields had to be planted. As people began living in disease-ridden settlements, as children fed more on cereals and less on mother’s milk, …child mortality soared….

With time, the ‘wheat bargain’ became more and more burdensome. …The average person in Jericho of 8,500 BC lived a harder life than the average person in Jericho of 9500 BC or 13,000 BC. But nobody realized what was happening. Every generation continued to live like the previous generation, making only small improvements here and there in the way things were done. Paradoxically, a series of ‘improvements’, each of which was meant to make life easier, added up to a millstone around the necks of these farmers…

…Whenever they decided to to a bit of extra work — say, to hoe the fields instead of scattering seeds on the surface — people thought, ‘Yes, we will have to work harder. But the harvest will be so bountiful!…’

The first part of the plan went smoothly. People indeed worked harder. But people did not foresee that the number of children would increase, meaning that the extra wheat would have to be shared between more children. …They did not foresee that by increasing their dependence on a single source of food, they were actually exposing themselves even more to the depredations of drought. Nor did farmers foresee that in good years their bulging granaries would tempt thieves and enemies, compelling them to start building walls and doing guard duty.

The pursuit of an easier life resulted in much hardship, and not for the last time. It happens to us today. How many young college graduates have taken demanding jobs in high-powered firms, vowing that they will work hard to earn money that will enable them to retire and pursue their real interests when they are thirty-five? By the time they reach that age, they have large mortgages, children to school, houses the in the suburbs that necessitate at least two cars per family, and a sense that life is not worth living without really good wine and expensive holidays abroad. What are they supposed to do, go back to digging up roots? No, they double their efforts and keep slaving away. (Pages 86-87.)

What do you think? Would you trade your job and the hard work it entails for a life of relative leisure digging up roots? I know I wouldn’t. Nor would I trade any of my many kids for anything.

Still, this passage is a good cautionary tale, isn’t it?

This entry was posted in Life, Philosophy and tagged Life, Sapiens. Bookmark the permalink.