Racially Profiled in His Own Driveway? 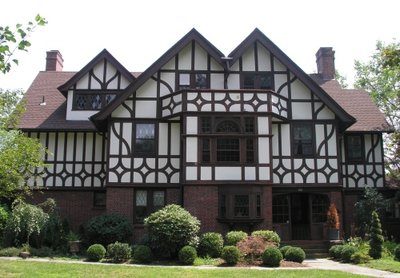 A Tudor-Style Home in Hartford, CT

When I was a baby-faced teenaged boy, I was in a department store and a sales clerk asked, “Can I help you, ma’am?” Talk about humiliating! When I responded in my teenaged-boy voice, the clerk realized his mistake and was as embarrassed as I was.

I was recently in a jewelry store where I wanted to buy a semi-custom item. I described what I wanted and asked the woman behind the counter, “Would you be the one to help me with that?”  I cringed because I knew she was probably thinking, “He would not ask a man that question. It’s only because I’m a woman that it enters his head that I might not know what I’m talking about.” Of course, that was not the case. I didn’t know if she was a sales clerk or an actual jeweler, so I had to ask the question before I rambled on and wasted both our time.

Now imagine that for your whole life people have assumed you are less than you are, just because of your race. That was the case for retired professional Major League Baseball player Doug Glanville, who is African-American.

As a successful man with a full career after 15 years as a baseball player, he had plenty of money and lived in one of the “nicer” neighborhoods in Hartford, Connecticut. One day he was shoveling snow in his driveway. Here is his account of what happened next:

A police officer from West Hartford had pulled up across the street, exited his vehicle, and begun walking in my direction. I noted the strangeness of his being in Hartford—an entirely separate town with its own police force—so I thought he needed help. He approached me with purpose, and then, without any introduction or explanation he asked, “So, you trying to make a few extra bucks, shoveling people’s driveways around here?”

It is well worth reading Mr. Glanville’s full article in The Atlantic. The upshot is that he and his family were understandably upset and offended that the white police officer had assumed that he, as a black man, was a day-laborer and could not possibly be the owner of a Tudor-style mansion.

Just another day of racial profiling in the good old U-S-of-A, right?

Well, Mr. Glanville was good enough to provide a link to an article in The Hartford Courant in which the Mayor of West Hartford offered his side of the story. Again it’s worth reading the whole thing, but here’s the core of it:

Recently, we received a 911 call at 10:06 p.m. from a resident who said a male was banging on the front door, demanding that she let him in. The resident had previously hired this man, via a door-to-door solicitation, to clear her driveway of snow. She was unsatisfied because, although paid, he never finished the job. The resident was scared. Officers couldn’t find the man, but told neighbors to call if he returned.

One is left to wonder how the officer could have handled this situation any better.

He did not know whether Mr. Glanville was the suspect, so he could not explain himself at the start of their conversation. To do so would have put an actual suspect on alert.

Nor could he have avoided giving offense if he had left Mr. Glanville while explaining, “I’m sorry to have troubled you; we’re looking for a suspected criminal who looks like you.” Yeah — because all black people look alike.

The actual course of their conversation seems to have been professional.

One also wonders how Mr. Glanville could have handled the situation any better. He, too, was polite, but it’s hard to blame him for assessing the encounter as racial profiling.

Yet, each man made a false assumption about what was in the other’s head: the office assumed that a simple question and professional interaction would give no offense; Mr. Glanville assumed that that officer suspected him of something just because he was black.

Maybe the moral of the story is that we must stop judging people’s motives, as difficult as that might be.

This entry was posted in Inspiration, Life, Uncategorized and tagged Racism, Truth. Bookmark the permalink.

One response to “Racially Profiled in His Own Driveway?”