As the controversy over Confederate monuments played out this year, I came to believe that Muslims had it right: don’t render an artistic likeness of anyone, least of all our heroes, lest we slip into idolatry. 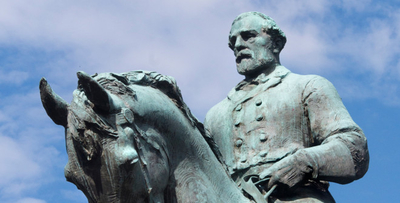 If we had followed that principle, we would still have the dispute over whether General Lee was a good man, but there would be more room to be honest because all sides could admit that he was good in some respects but flawed in others. A statue makes the issue more black-and-white: either we pull the statue down, or we leave it up. Nobody wants half a statue. And the statue itself is only going to portray the general in a one-sided manner, most likely in a noble pose on a stallion.

That controversy has receded somewhat but only because new ones have replaced it. In the wake of the Harvey Weinstein scandal, one powerful man after another has been exposed as a sexual predator. These men were, it is fair to say, idols. One wag noted that Harvey Weinstein had been thanked more than God at the Oscars.

Particularly ironic in the context of this post are the entirely credible allegations of sexual abuse of a 14-year-old girl made against Alabama’s Republican candidate for the United States Senate, Roy Moore. They are ironic because he made his national reputation with a statue — in this case a statue of the ten commandments (more irony), which he insisted on having at his courthouse when he was the Chief Justice of Alabama Supreme Court, in defiance of the rulings of higher courts. For this he was removed from the bench, becoming not only an idol of the most extreme fringe of the Religious Right but a martyr.

If there were a statue of Judge Moore, we would be arguing right now over whether to pull it down, with at least one of his defenders arguing, “Take Joseph and Mary. Mary was a teenager and Joseph was an adult carpenter. They became parents of Jesus. There’s just nothing immoral or illegal here. Maybe just a little bit unusual.”

It would seem that none of our idols are safe. Presidents Washington and Jefferson owned slaves; President Trump was justified when he wondered whether statues honoring those great men would be the next ones destined for the scrap heap.

Yes, maybe Muslims are onto something. Statues honoring people we idolize do have the effect of literally casting our admiration in stone. Perhaps we are better off without them so we can have more-nuanced conversations.

On the other hand, they are extremely effective at honoring people we admire, teaching their virtues to succeeding generations, and incentivizing virtue by conveying the message that society honors virtuous people.

So let’s get creative and look at statues differently. They are not permanent monuments; they are time capsules that contain our concept of virtue at a particular moment in history. As with all time capsules, the fun comes when we open them and marvel at how much has changed.

At one time, some communities thought that General Lee was so virtuous that they wanted to immortalize him in stone. A few decades later, society had made so much moral progress that it realized that racism and slavery are not the good and natural order of things, but insidious and vile, and those who fought to preserve them do not deserve our eternal acclaim, whatever their other virtues might be.

At one time, it was accepted that men would be men and this meant wielding a certain amount of power over women. Harvey Weinstein said, “I came of age in the 60’s and 70’s, when all the rules about behavior and workplaces were different.” This idolized man has been brought low so quickly that, as far as I know, the only statue of him is an effigy that was constructed for the sole purpose of being burned.

At one time, Roy Moore’s idolizers believed that he was a thoroughly good man. Now the more open-minded of them realize that even people steeped in The One True Religion manifest the same flawed passions as everyone else. This is progress.

Yes, we do progress on our moral journey. We erect statues along the way to celebrate virtue as we understand it. We pull them down in repentance when we realize how primitive our earlier understanding was. It’s all good.