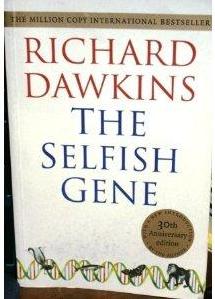 The ideas in this final chapter have penetrated popular culture more thoroughly than everything in the previous ten chapters combined. That’s fitting, because it’s is all about how ideas penetrate popular culture!

This is the chapter in which Dawkins coined the word meme to mean a replicating unit of cultural evolution. Examples include “tunes, ideas, catch-phrases, clothes, fashions, ways of making pots or building arches.” Amusingly, the word itself has evolved additional meanings, but this is where it all started.

The limitless variety of bodies and strategies all started with one or a few self-replicating molecules, which soon spawned mutants, which then competed with each other, and here we are.

But why limit the discussion to self-replicating molecules? What if the replicating units were ideas?

Everything we have seen about genes would apply to the replication of ideas. Ideas would mutate as they were passed from one body to the next. The mutants would accrete strategies for increased replication. The survival of host-bodies would be of little consequence compared to the survival of copies of the ideas. Ideas might form alliances to reinforce each other.

And this is exactly what we see. Ideas are passed down in a culture just as genes are transmitted through a population. Some ideas are beneficial. Others can only be called infectious.

Sometimes we say that an idea “takes on a life of its own” and that’s a very apt description.

As Dawkins puts it, “Just as genes propagate themselves in the gene pool by leaping from body to body via sperms or eggs, so memes propagate themselves in the meme pool by leaping from brain to brain in a process which, in the broad sense, can be called imitation. …memes should be regarded as living structures, not just metaphorically but technically. When you plant a fertile meme in my mind you literally parasitize my brain, turning it into a vehicle for the meme’s propagation in just the same way that a virus may parasitize the genetic mechanism of a host cell.”

I’ll illustrate using the Christian religion, since I’m familiar with it.

Like any religion or philosophy, Christianity is not just one meme, but a constellation of them. Each of the 10 Commandments is a meme, the virgin birth is a meme, the resurrection is a meme, and so on. These memes ride together on the chromosome we call the Christian faith, in symbiosis.

Each of these memes spawns diverse mutations over time, and thus diverse strains of Christianity arise. The faith now occupies many niches in the ecosystem of ideas, very much like species have evolved to occupy physical niches. Just as strains of animals diverge through evolution so much that they can no longer mate with each other, different branches of Christianity have split so completely that some do not recognize others as Christian.

Sometimes, the Christian chromosome has been crossed with other world-views, resulting in syncretic religions like Santeria.

Let’s look at one of the Judeo-Christian memes: life after death. This one has mutated considerably. It all started with the concept of Sheol — a sleepy, dreary sort of place to which we  all descend at death. Even the patriarch, Jacob, expected to go there (Genesis 37:35), and so could the wicked (Numbers 16:33). God was there (Psalm 139:8) but its denizens were unaware of him (Psalm 6:5). It was a place of “no activity or planning or knowledge or wisdom” (Ecclesiastes 9:10). Basically, you were asleep.

Asleep? So who cares?

Everybody goes there? So why should I worry about it?

Obviously, the Sheol meme does not have much replicating power. We should not be surprised that the Jews who believed it were not proselytizers. But the meme mutated and over the next few hundred years the mutations overwhelmed the original in the meme pool.

The idea of godly people being rewarded by an eternity of bliss, but the ungodly suffering eternal separation from God, was one of those mutations. The reason this meme was more powerful was that it contains the motivation for its own replication. You want to tell your loved ones how to avoid hell and go to heaven.

Further mutations arose. Eventually the Catholic church enumerated 7 deadly sins and specific punishments for them. Pride was the most serious, and punishable by breaking on the wheel in hell (warning: very disturbing content). Lesser sins got you boiled in oil, thrown in snake pits, smothered in fire and brimstone, etc.. How far we have wandered from the sleepy meme of Sheol!

Some liberal branches of Christianity carry another mutation, which sees heaven and hell as conditions we create for ourselves here on Earth.

The spread of these memes is only tangentially related to their truth or falsehood. As Dawkins establishes earlier in the book, any self-replicator will be successful to the extent that it possesses three characteristics: longevity, fecundity, and copying-fidelity. By all three measures, fundamentalist faiths have the upper hand.

A meme that emphasizes a life-long “relationship with God” and severely penalizes apostasy will have a longevity advantage over memes that encourage a live-in-the-moment approach. We have already seen that the hell meme is more fecund than the less fearsome ideas about the afterlife. A faith based on a foundational text has an inherent copying-fidelity advantage over a faith that extols free inquiry.

If truth or falsehood have little to do with the success of a meme, what is to become of us? In a culture that has a strong dose of the rationalism meme, another meme that can be shown to be ridiculous may eventually be shamed into extinction, but one thing on which we can all agree is that people (other people) have a nearly unbounded ability to believe the ridiculous.

Some memes have done their human hosts much good. The meme of participatory democracy has unarguably improved human well-being where it has taken hold. The technique of mass production is also a meme, and has vastly improved our standard of living — while, some would say, nearly extinguishing other beneficial memes.

Will the good memes or the bad memes prevail? That is an open question, and I’ll speculate on it in an upcoming post. [Done, here.]