A few weeks ago, a friend asked a question that has stuck with me. “Why do we think that the divine is shrouded in mystery? Isn’t it more likely that the divine exhibits clarity?”

History suggests she’s onto something. In most realms, experience has proven the wisdom of Occam’s Razor: the simplest explanations, with the fewest new assumptions, are most likely to be correct. 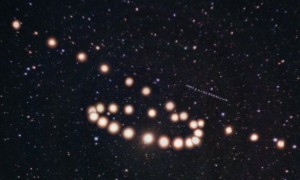 Loopy Paths of Mars and Uranus as Seen from Earth

At one time, people insisted that the Earth was the center of the universe. They were then forced into increasingly complicated explanations for why the planets traveled in strange, loopy paths in the night sky. The need for mental gymnastics should have been the clue that they were on the wrong track. Then along came Copernicus with his simple explanation that all planets, including Earth, orbit the Sun. He proved for the thousandth time that the simplest explanations are the best.

Even life itself is subject to increasingly simpler explanations. Our DNA specifies our physical traits with an alphabet of just four letters. Francis Collins, the director of the National Institutes of Health, was inspired to call this The Language of God.

So why do we accept the idea that the divine (however each of us understands that term) is mysterious and beyond our understanding? Isn’t it more likely that we have not yet discovered the Simple Truth?

This entry was posted in Life, Philosophy, Truth and tagged Life, Truth. Bookmark the permalink.