Ruled for the Pleasure of Men

On Friday, I visited the wonderful Hill-Stead Museum in Farmington, Connecticut, where I saw Dancers in Pink by Degas. The docent told us that these girls were poor, and were selected more for their looks than for their talent. They were not the main attraction, but would perform during the intermission at the opera.

As you can see, one of them wears an earring. 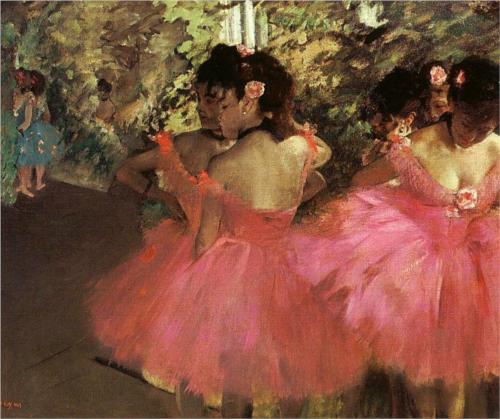 The earring signified that its wearer had a patron — someone who had promised to take care of her and her family for the rest of her life.

“Good point. For the rest of his life,” replied the docent, a sweet woman in her seventies.

All at once, I saw two things.

The first was that poverty brings with it many ills and humiliations beyond being poor. One can imagine a poor family with a beautiful daughter. It fell to her to sell her very person to support her family. You can write the script from there — her degradation; the devaluing of her own marriage, if she were fortunate enough to have one; her worries for her children; her feeling of being forever trapped.

Dancing girls looking for “patrons” no longer vie for the attention of wealthy men during the intermissions of operas. However, plenty of women resort to prostitution, or simply live with abusive, unstable boyfriends because they feel they have no better option.

I call on those who loudly care about morality (I’m looking at you, Religious Right) to work to structure society so as few women as possible face these impossible choices.

What will work? I’m not sure, but I do know one thing: the people least likely to find the solution are the powerful, white males who have both promoted and benefited from the inequalities of power and wealth for all of Western history.

That brings me to the second thing. I felt another reason to rejoice in President Obama’s reelection victory. He won with a coalition of the relatively powerless: young people, African-Americans, Hispanics, homosexuals, secularists — and women. Romney’s base of older, white,  evangelical men are no longer enough to carry the day. They still have plenty of power, but they don’t have the monopoly they once had.

With Obama’s reelection, all segments of society are seated firmly at the table, so we are more likely to find solutions to some of our most vexing problems. No segment will write the rules for everyone else.

Powerful males wrote the rules of Degas’ society. The dancers were ruled for the pleasure of men.

I’m glad we have given ourselves a chance to get past that.

6 responses to “Ruled for the Pleasure of Men”