God versus the Multiverse

When I lost my belief in God, the near-universal reaction from my Christian friends was to sweep a hand at the marvelous world around us and say, “Where did all this come from, then?” For them, God was the only possible explanation. 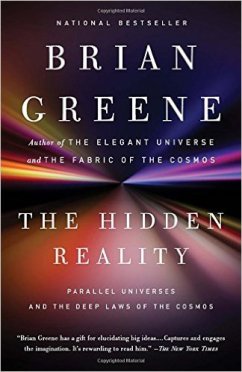 Among scientists, the hypothesis that our universe was born from a larger multiverse has steadily been gaining credence. There are several ways this could be true. As one possibility, the Big Bang could have been a quantum fluctuation in another universe, which in turn could have been born in the same way from its parent, stretching back forever. With this model, the multiverse is like an eternal froth of bubble universes. There are other models, too. I recommend Brian Greene’s book, The Hidden Reality: Parallel Universes and the Deep Laws of the Cosmos if you’re curious.

As an answer to “Where did all this come from, then?” the multiverse model may seem to be on equal footing with “God did it.” By definition, we cannot reach out and touch other universes to prove they (and therefore a multiverse) exist, much less can we prove that our universe arose from the multiverse by some natural process.

It’s true that we can neither prove that God did it, nor that the multiverse and the laws of physics did it. But as I outlined last time, just because competing explanations are uncertain does not mean they are on equal footing.

The multiverse-with-quantum-fluctuations explanation builds on what we already know and have proven about quantum physics. Quantum fluctuations do happen and physicists have made mathematical models of how such a thing could produce the Big Bang. Their models have made predictions that have later been proven true, such as the existence of a highly uniform, low-temperature background radiation coming from all directions.

Theists may say that the God-did-it explanation also builds on what we already know and likewise requires few if any additional assumptions. We know there is a God, they say, and we know he wants to have fellowship with humans, so his creating the universe becomes a logical necessity.

There are two obvious problems with this.

First, we don’t know that there is a god, much less the Judeo-Christian God. Many people believe there is, but many people do not, and unlike the knowledge of physics, knowledge of God is not available to all. In principle, anyone can go out and do experiments to disprove or confirm the laws of quantum physics. Nobody can disprove God in the same way. Indeed, it seems that whatever happens in the world is taken as evidence for God: suffering is evidence that he wants to build our character or cause us to take refuge in him; enjoyment is evidence of his providence or approval. (I speak from the experience of 40 years in the church.) As Sam Harris said, that’s playing tennis without a net.

In the previous post, there were three explanations for the tides. All of them were incorrect, but one was still better than the others. The lower-quality ones were that a very large woman lifts her skirt up and down, and that a very large sea creature breathes in and out. The better explanation was that the rays of the Moon heat rocks under the sea, causing water to boil at the lowest depths, which in turn causes water at the surface to rise. This was a better try because it built in a natural way on what we already know: that light-emitting bodies also emit heat and that boiling water takes up more space than water at rest. And unlike the bad explanations, it explains why the tides track the position of the Moon. It was also disprovable: if the tides ever failed to track the Moon, we would know the explanation was wrong.

Like the worst explanations for the tides, the God-did-it explanation for the universe posits a fantastical being that nobody has ever seen. It also makes no testable predictions.

Like the Moon-ray explanation for the tides, the multiverse explanation may also be wrong, but at least it does not rely on an unseen magic being, it is a very natural extension of what the known laws of physics, and it makes testable predictions.

One last note about those predictions: People often object that the multiverse hypothesis isn’t testable at all because we can’t access the other universes. In a way, that’s true, but what is testable — and what has been spectacularly confirmed by tests — are the fundamental laws of quantum mechanics. Those laws would naturally give rise to a multiverse. Even though we can’t test the multiverse itself, we have confirmed what would give birth to it.

What do you think? Do you prefer the God explanation? If so, why?

5 responses to “God versus the Multiverse”