Last time, we talked about The Beat. Now let’s mine more from today’s NPR story on cockatoos and elephants that can make music. The story ended with this remarkable observation and hypothesis.

“We now know that when people play music together, oxytocin is released,” says [Dan] Levitin, [professor of psychology and neuroscience at McGill University]. “This is the bonding hormone that’s released when people have an orgasm together. And so you have to ask yourself, that can’t be a coincidence, there had to be some evolutionary pressure there. Language doesn’t produce it, music does. So the idea is that there’s no primate society that I know of that has more than 18 males in the living group because the rivalries cause the groups to break apart and there’s too much fighting. But human societies of thousands of members have existed for thousands of years. And the argument is that music, among other things, helped to defuse interpersonal tensions and smooth over rivalries.”

Did you catch that? “Language doesn’t produce [oxytocin], music does.” Isn’t that amazing? And could it be true that one reason humans are able to live in groups large enough to make civilization possible is because we make music together?

I was reminded of the time I first set foot in the last church I attended regularly. The ceiling was relatively low (for a church) and when everyone started to sing the room filled completely with the music. I immediately felt, “I belong here.” 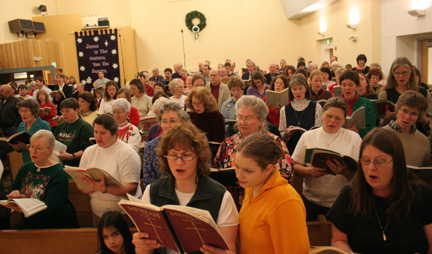 And if you read my post, Why I Became a Christian, you might recall that music was important in that group-joining experience as well.

There are examples in other areas.

What do we do when an Olympic champion is crowned? Do we display the national bird of his country? Do we have him to stand on the podium in his traditional, national costume? No, we play his national anthem. His compatriots in the audience are often moved to sing along.

I remember that when I was a child I sang certain songs with my friends. I had no idea what they meant, but it was a bonding experience. (The song Jeremiah was a Bullfrog comes to mind.)

So I think professor Levitin is onto something. Making music together fosters social cohesion.

How wondrous it is that merely bouncing air molecules off each others’ eardrums brings … harmony!

I heard yet another interesting story on NPR this morning. This one touched on how the ability to keep time to a beat might have evolved. It definitely qualified for this 31 Days of Wonder series.

First of all, if you are not one of the few people on the planet who have not seen him already, check out Snowball the dancing cockatoo.

Even more interesting that a bird can dance is that our closest primate relatives cannot. They can’t even mark time with a stick, to a beat. To be sure, apes beat their chests and chimpanzees bang things around to display dominance, but that’s not the same as learning a beat from someone else. As the NRP story said, “Researchers tried to train macaque monkeys for four hours a day, six days a week for a year just to tap their fingers in time to a metronome. But the monkeys couldn’t do it.”

So which animals can?

Scientists have observed that species that are able to keep time to an external beat are the ones who, for other reasons, are adept at vocal imitation (and more, at the link). They also tend to be social species, which leads to the next post.

If you’ve been following these 31 Days of Wonder closely, you may have noticed that I missed a post on Friday. Here’s an extra one today to make up for it.

I’d like to share with you one of my favorite classical guitar pieces — actually a 3-piece suite called 3 Forest Paintings by KostantinVassiliev.

What always amazes me about music is that the same 12 notes of the chromatic scale are available to everyone, yet most of us could not in a thousand years come up with pieces to match those of accomplished composers. What is it about a good composer’s brain that makes his style unique, and so unattainable by people without his gift? Likewise for the performer, who in these videos is the  very talented Roman Viazovskiy.

I promised something less geeky (and less Greeky) today, so here’s some classical guitar music by Marek Pasieczny.

I thought the intensity of his performance in the first video earned it a place among 31 Days of Wonder. My favorite movements are the opening fugue and the nocturne that comes next. He plays the fugue with a conviction that will make your hair stand on end, as one of the YouTube commenters put it. In the nocturne (4:08), he grabs you with a simple idea and will not let go.

Now here’s a young man playing something Pasieczny wrote when he was young – only 19, in fact. If everyone on Earth were to either play or compose music like this for an hour a day, we would all be at peace.

Pasieczny, who is Polish, loves to explore the musical idioms of other cultures. If you’re up for some musical adventure, here are his variations on a traditional Japanese tune. There is an introduction, and then you’ll recognize the tune once it appears at 0:47 (and is stated even more clearly at 1:30). Pasieczny exploits the many tone colors of the guitar to produce an authentic, Japanese esthetic.

Marek Pasieczny is a wonder, is he not?

August will be 31 Days of Wonder on this blog. To start things off, I’d like to share with you the friendship and music of Jonathan Antoine and Charlotte Jaconelli, two contestants on Britain’s Got Talent.

Charlotte didn’t sing her best at the audition, and of course Simon didn’t let that go unremarked. It became Jonathan’s turn to support Charlotte.

In their next performance, she opens with a sensitive and powerful solo. In the midst of this serious number (1:12), Jonathan smiles at her. Where would they be without each other? (Sorry you’ll have to click through to YouTube to see the video. Believe me, it’s worth an extra click.)

Isn’t it marvelous and beautiful how friendship and support can help people flourish in the midst of a survival-of-the-fittest competition?

Believe it or not, Charlotte and Jonathan were not even the winners of the 2012 edition of Britain’s Got Talent. They came in second. Top prize went to a teen girl and her dog – another pair with an amazing bond.

The voting audience loves to see people (and/or dogs) work together. It makes everyone feel good. In this way, society strengthens its own memes of cooperation and support and we all become better off. What an elegant mechanism Nature has for producing progress and harmony!