In Which Belief Becomes Culture and Gains Respect

Not long after I became a Christian, Hal Lindsey’s book, The Late, Great Planet Earth stormed onto the scene. I well remember being convinced by its interpretation of biblical prophecy — that the world would come to an end within “one generation” of the 1948 founding of Israel. With a biblical generation supposedly being 40 years, that would mean by 1988.

I was not alone. The book was a best-seller and the latest wave of end-times prophecy mania was on. For me, this was a positive experience: God was in control of history and great events were just around the corner.

However, some people are more compassionate than I was and are not as eager for the world to end, as we will see in a moment.

One aspect of end-times prophecy commonly taught in the evangelical church is that the original Temple must be rebuilt before Jesus will return. The original site is where the Dome of the Rock (the famous golden dome of Jerusalem’s al-Aqsa Mosque) now stands. Obviously it must be cleared away before the Temple can be rebuilt. Putting two and two together, a sign of the imminent return of Christ must be the destruction of the al-Aqsa Mosque. 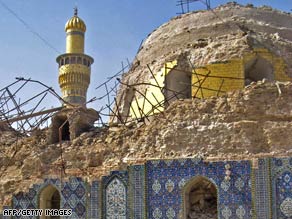 In 2006, the al-Askari mosque in Iraq was bombed. It, too, has (or had) a golden dome. When one of my daughters, who had been brought up in the evangelical church, saw this on the news, she was visibly shaken. “Dad it has begun.”

“The end of the world,” she replied.

I quickly assured her that this was only the al-Askari Mosque in Iraq, and not the al-Aqsa Mosque in Jerusalem. She was relieved, but as I look back on this episode I am not relieved at all.

First of all, I am ashamed that my daughter was ever afraid of anything because of nonsense she had heard on my watch.

Thankfully, she is past that, but I am still not relieved. I am concerned that millions of people live in fear that the world is about to end. Worse, millions more are looking forward to it — with bad consequences that are beyond the scope of this post.

Suppose a father were to tell his impressionable child, “The world is going to end soon. Before that happens (and it could happen at any moment), you must agree that the Moon is made of cheese and turn your life over to the Man in the Moon. If you don’t, then when the world ends he will fling you into the Outer Darkness for all eternity and you will never see your family again.” We would call such a father abusive, wouldn’t we?

But when an entire evangelical movement says something not unlike that, we don’t call it abuse. We call it “the evangelical culture” and grant it all the respect due any religious opinion in America.

In case you are able to shrug your shoulders at that, I’ll close with a quotation* from Sam Harris’ book, The Moral Landscape. (Warning: graphic content ahead.)

If only one person in the world held down a terrified, struggling, screaming little girl, cut off her genitals with a septic blade, and sewed her back up, leaving only a tiny hole for urine and menstrual flow, the only question would be how severely the person should be punished, and whether the death penalty would be a sufficiently severe sanction. But when millions of people do this, instead of the enormity being magnified millions-fold, suddenly it becomes “culture,” and thereby becomes less, rather than more, horrible, and is even defended by some Western “moral thinkers,” including feminists.

Genital mutilation is not common in America, but can we reflect for a moment on the beliefs we do hold that are in themselves horrible, but have become so widespread that they gain respect as “culture”?

* – The quotation is actually Harris quoting Steven Pinker in The Blank Slate, who was in turn quoting anthropologist Donald Symons.